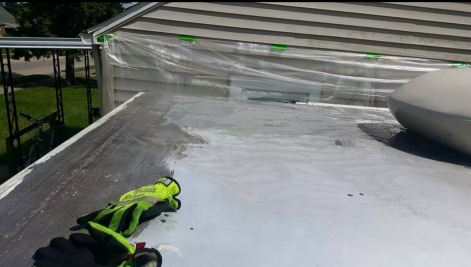 Alrighty…in process of renovating this 1977 travel trailer. Let me just say a few things that I think are really important. Originally, I was hoping to find an older travel trailer in pretty good condition for around $3,500. Not very realistic. I found a very nice 2003 that was near perfect condition. The 2003 camper was pretty neat. I loved the flooring. I loved the walls and it had a bunk room—great for grandchildren. However, they were asking $5,000. Had I purchased that one, I would have had to sink another $1,500 or more into it, in order to insulate and to reconfigure it a little bit. Sure, that camper, at 24 feet in length and with extra sleeping quarters, would have been perfect for living and entertaining family; however I must stay focused on the purpose of buying a camper—it is not meant to be a permanent home for me, but just a transitional one. I do not want to get into the process this deeply financially, as the purpose of this camper is to greatly reduce my living expenses right now in order to afford me about 18 months of living super cheap so that I can save $$$ for my tiny house build next year. The more money I spend on a camper now, the less I get to direct towards my tiny house build later.

*
So, this 1977 camper that I settled upon which looked pretty great at first, only cost me an initial $1,300. However, as I began removing components in order to insulate the camper for winter living, I have discovered so, so many finer details that are, well, deteriorating. The good news is that the metal frame underneath is sturdy and the exterior aluminum siding is practically pristine. Also, most of the wooden framing inside looks like new.

*
Here is the main point that I want to share. Details—fine details—as I go through this process of first gutting the camper and now re-framing a couple rotten spots, adding some new framing/a new subfloor, installing a second layer of insulation, re-sheathing the interior with more attractive finished birch plywood, and constructing new real wood built-ins—and while doing so, I am literally combing over every centimeter of this camper from top to bottom and inside out—I just keep finding little things that stand out to me. Last weekend I spent no less than nine hours up on a ladder scrubbing all the fixtures upon the roof and scrubbing every inch of the exterior, giving her a much needed wash, removing some moss and mold, paying close attention to the aluminum windows and making sure that every part of the surface got cleaned thoroughly. Up and down the ladder with countless buckets of soapy water, I went—I cannot tell you how many times. Here is what I discovered.

*
By examining every inch of this camper, I am becoming so very familiar with it. I am learning much more about how it was put together, how all the utility components function and I am discovering where the weaknesses are…finding parts that are really worn, plastic that is brittle, gaps in the seams, missing screws… I feel that if I had not, if I do not continue to detail this 40 year old camper in this manner—every nook and cranny—there may be some issues that I’ll miss going forward. If I had just purchased a camper that is newer, I doubt that I would have been so detail-oriented and I likely would have just moved into a newer camper—not noticing hidden issues that need to be addressed for full time living. It is incredible how much one can learn about the construction of a travel trailer by de-constructing one—taking the interior panels out and looking inside the walls, looking behind or under the built-in appliances, and crawling underneath to examine every inch of the undercarriage.

*
I’ll give an example. Two of the first items that I took out and got rid of were the propane stove and refrigerator. They were not in good condition. I discovered that the vent behind the refrigerator which is louvered metal, leads directly to the outside. In fact, this thin, louvered plate is a huge area (18 inches square) that would be a heat deficit in winter and a cool air deficit in summer. The original refrigerator was incased in a built-in that was sheathed with thin paneling and no insulation—as refrigerators need air around them so as not to overheat. The thing is that the vent behind the old refrigerator—you can literally poke your fingers through to the outside. So, I need to address this issue—keep the vent; but put up a breathable barrier that does not let in bugs, but insulates better. I never would have known this had I not removed the built-in around the old refrigerator and had I not removed the appliance itself. I believe it is important to remember that these campers are built to be as light as possible, are only insulated for the comfort of brief, warmer weather outings, and are definitely not built at all like a full time house.

*
Here are more little details revealed by getting up close and personal with this camper—my fenders are faded and have some rust spots where they are bolted on. Upon closer examination, I realized that many of the bolts had worn the plastic through and were no longer holding the fenders on at all. I thought about buying new fenders—but what business would carry these 40 year old fenders? Camper World does not even carry sealant for aluminum roofs any more–I doubt they stock 40 year old fenders.  I decided to jazz them up a little instead and of course, I made a trip to the hardware store to fetch some nylon washers and some new galvanized screws. So, I removed them, cleaned them thoroughly, and painted them a nice light green color. Had I just let them be, it is quite possible that they might have broken off completely at some point. Paint $12, screws and washers $12—a good savings for me and much improved aesthetics.

*
Another thing I came across was the off-grid water tank in the front under the couch/fold-out bed. That tank was taking up thirty-two cubic feet of what could be storage space for all of my clothes. There is also a nice little water pump located there next to the tank. That water pump may come in handy in my tiny house.  I determined that I don’t need the water tank or the pump and when I removed them, I noticed that the tank was full of mud and was also pretty old and brittle—not very usable anyway. Had a never removed the built-in couch/bed, I would not have gotten such a close look at the tank and maybe would not have been able to determine it’s obsolescence.

*
Another example of an important detail is when I examined the roof. I discovered that the previous owner only coated the two far ends with sealant and not the entire roof: plus, the sealant is peeling up in places. So, I went out and bought a 5 gallon bucket of sealant (for metal roofs) and am going to thoroughly clean and recoat the roof to ensure that I hopefully do not have any leaks. I also bought pliable caulk that is specifically formulated for patching and repairing metal roofing and I am going to go over the interior and exterior seams and all other exterior surfaces to ensure the integrity of the outer envelope of this camper.

*
One of the last discoveries that I’ll mention here, I stumbled upon entirely by accident. After removing all the thin paneling from the ceiling and after removing some of the baton insulation that was moldy, I got a good look at the aluminum siding from the inside; but I also had to remove half of the lighting fixtures to accomplish this step. This necessitated purchase of a work light. I purchased a contractor’s flood light which is so bright that I can now easily work on the interior even at night after I come home from work. One night, I was doing some work and when I walked outside the camper, I noticed a few pin holes in the exterior of the camper where that bright work light was shining against the interior and beaming through to the outside. It occurred to me to test for more pin holes in the exterior by repeatedly repositioning this bright light on the inside and then repeatedly going outside and examining the exterior to detect any more pin holes that can let in water. I definitely do not want to have any future leaks after all my hard work. Had I not removed so many interior lights, I probably would not have felt the need to purchase the incredibly bright work light that really helps reveal any problem areas.

*
All I am really trying to get at is this: By jumping into this renovation with both feet and by trying to be as thorough as possible, while still maintaining a frugal budget, I am getting a firsthand education in travel trailer construction and repair. This will help me operate this camper properly and this will also teach me much about carpentry work for when I begin my tiny house build.
I hope this is helpful. Happy glamping all!

All I want is a room somewhere…

Follow Z. Do little's transition to tiny house on WordPress.com