So, I am two weeks into this travel trailer demolition/rennovation.  Some interesting discoveries about Daisy and about myself.

There is some rot in the front ceiling on the driver’s side.  I knew this when I bought her. I also found some moisture in the ceiling above the bathroom and above the refrigerator.

I can recall lots of suggestions from everyone.  “Leave everything in tact and just live in it as is” is a line I heard.  “Don’t get rid of the propane refrigerator” is another. “Why would you want to remove the propane stove?” is yet another common remark. And let’s not forget the ever popular, “Don’t remove the upper wall cabinets”.

It is important to note that in order for me to thoroughly insulate these walls, ceiling, and floor–for winter living–I have to get to the walls, which includes getting most of the built-ins and cabinets out, so that I can install an interior frame and insulate in between the studs. Then, the camper gets new sheathing throughout which will be much better than the original thin panelling that covered the walls and ceiling when I started. 1/4 inch plywood ought to suffice very well.

Here is what happened to me when I started taking things out.  I discovered alot of trapped dirt under built-ins, dead wasps, mold, rust, brittle plastic, osb paneling and pine framing that is all but disintegrated, a cracked toilet, a cracked shower pan, a rotted shower head fixture (as in, not functional), half the ceiling panelling is rotten. The refrigerator which, by the way, weighs upwards of 100 pounds is rusty, smelly, foul, and has rotten seals caked with rust.  I also discovered that there is not any insulation, nor much of a wall behind the refrigerator. The stove is rusted throughout and is very weighty.  When I think of old propane appliances not in great condition, I think fire hazard.  Good riddance to those.  Right now, there is a five feet tall and eight feet in diameter pile of rubble in my driveway–contents/what was inside this camper.  And, I have already put out to the curb  two large piles of rubble in the past two weeks.

Fortunately, the walls and wall framing look great and most of the framing in the ceiling looks like new.  Here is my point.  When I inspected the interior and exterior of this old girl before the demolition, most everything looked pretty great.  Had I not been so thorough in my rennovation ambition, had I not chosen to rip out most of the interior built-ins and all the appliances and the bathroom in its entirety, surely I would never have fully realized just how bad a shape the majority of the interior of this old camper really is in… I am very pleased that I have made the commitment to truly rennovate this camper practically from the ground up.

Having said that, I must admit that now that I take a good look at what remains of this “shell” of a camper, the sight of it is pretty intimidating, even frightening. I have been very carful to not disrupt the wiring and remaining plumbing.  I now have the task of putting her back together with new and stronger materials.  I must also check all the electrical and plumbing fixtures and I must seal her up better than new so as not to have any leaks in the future.  I must get her dried in before winter sets in.  I feel pretty confident that she will be completely finished by late fall.  I am not claiming any expertise, as I have nearly zero carpentry experience.   What I do possess is an extreme drive to accomplish my goal and I do have expert help and expert advice at the ready and lots of common sense.

I am including some images. A warning: she looks a little worse for the wear right now.  🙂

Here is a lovely image of part of the frame from the nose of this old camper.  Water can do just as much damage as can fire.  This black thing used to be a pristine piece of pine–framing–it now crumbles into a pile with a slight graze of the finger. Next to this black rotten wood is a healthy piece of wood framing from one of the built-ins for comparison.

Here is the front  corner (driver’s side) of the camper where there was a leak.  😦

And…here is the spacious remaining inside of this baby.  Lots of potential. 🙂 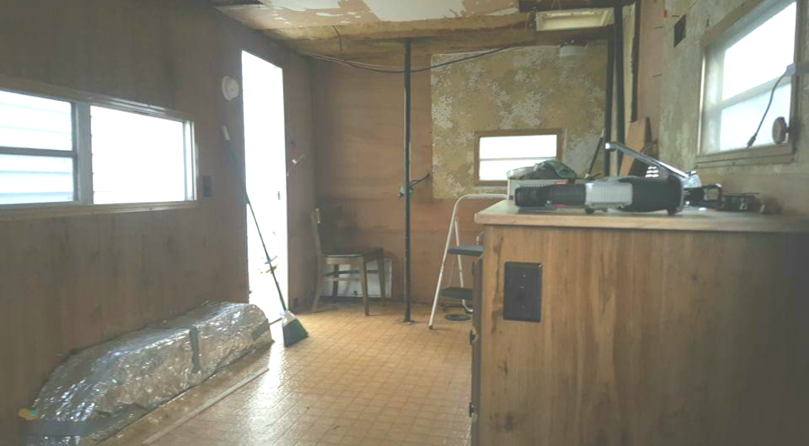 Brighter days ahead.  The worst is over.  🙂  Glamp on! 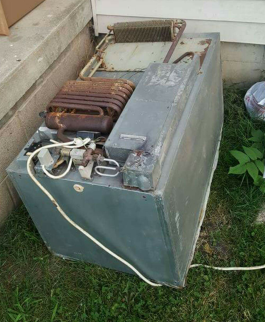 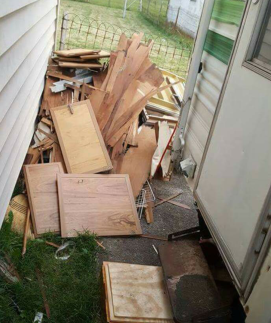 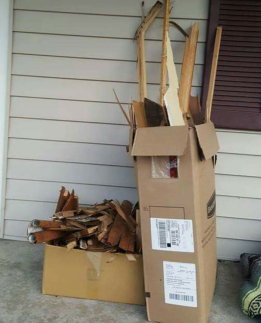 All I want is a room somewhere…

Follow Z. Do little's transition to tiny house on WordPress.com